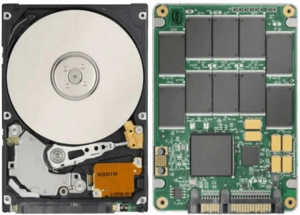 In this post, we’re going to look at the ways upgrading your existing older PC or server can greatly improve performance as well as productivity of your employees, delving into the differences between hard disk drive (HDD) and solid-state drive (SSD) boots and how SSD ideally targets boot drives or high IO activity, while mechanical drives still have their place for larger data that doesn’t demand heavy access.

Okay, we threw a lot of words at you there, so let’s begin by breaking things down to make them a bit easier to understand. In its simplest form, an SSD can be thought of as “flash storage” with no moving parts whatsoever; as a result, they’re smaller and take up less space in a PC case – in some instances even mounting directly to the motherboard. Put succinctly, SSD storage is much faster than its HDD equivalent.

On the flip side of the coin, HDD storage is comprised of magnetic tape and includes mechanical parts within, making them larger than SSDs and much slower when it comes to reading and writing duties.

Why Use an SSD?

When choosing a PC or server, the main focus should be on speed – if you only have HDD storage in your machines, speed isn’t something you’re going to experience. Just off the top of our heads, here are the things that will cause you some trouble when running hard disk drive components:

The benefit of an SSD is that this waiting time is significantly reduced, even when talking about cheaper drives, when compared directly to HDD. The bottom line? Anything loaded on it will perform actions much faster.

Indeed, one of the most ideal uses for an SSD in a PC is as a boot drive, which means installing a rather small-capacity drive on which your Windows 10 operating system will live and boot up from on a daily basis. In so doing, your PC will boot up and be ready to get to work in the blink of an eye, even offering you a way to put your most frequently-used software on there for a similar experience.

While the lifespan of an SSD is not as long as that of an HDD, it is possible to use a solid-state drive as the primary drive in a PC; many laptops, for example, only boast SSD storage.

The Case for HDDs

Mass storage is the primary case for HDD, as this type of drive is available in some overwhelmingly large sizes. In an ideal setup, an efficient system would have an SSD to boot Windows from and one or more HDDs to handle the aforementioned mass storage.

So, How Can Upgrading to Solid State Drives Improve Your Business Productivity?

We covered one of the biggest reasons SSDs make sense, which is that they are cost-effective and provide an obvious increase in performance with regard to data movement and speed. Overall, SSDs are far more durable than HDDs simply because of their lack of moving mechanical parts, what with HDDs becoming worn more easily over time and being significantly more susceptible to damage should they be dropped – which we have witnessed firsthand here at DMS iTech.

Consider the following, as well:

As your business continues to evolve, you will have to adopt new IT technologies to support it in order to remain relevant. But worry not – turning to a professional solution from the likes of DMS iTech for these types of projects can help you stay under budget with as little interruption to business flow as possible.